Early indicators of Covid-19 Effects on Babies and Toddlers 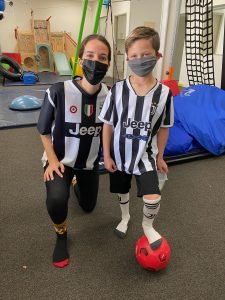 Research indicates COVID-19 has impacted children’s brain development differently than you would think. Dr. Sean Deoni, a physicist and neurologist, has been using MRI imaging to study infant brain structure, development, and function. Like many other child development experts, Dr. Deoni understands the rapid brain growth and development in the first three years of life. Children’s world changed during COVID-19 closures due to parental stress and anxiety, socioeconomic challenges, along with prenatal and postnatal health concerns.

Dr. Deoni’s study of infant brain growth and development continued through COVID-19 and his study has shown that children and their brain development have been impacted by COVID-19. Images from infant MRIs show that the brain physically changes by expanding three times its size at birth. The surface of the brain also changes from smooth to more complex due to cortical folding and neural density. The images also show a change in color from predominantly gray to include white matter, which is evidence of the neural connections formed within the brain. Changes in brain function are observed externally as we see infants behavior, movement and communication develop over the first 1000 days of life. The rapid brain growth and development is facilitated by children’s experiences interacting with and interpreting the world.

Longitudinal studies indicate that infants born right before the pandemic show statistically significant decreases in cognitive function. Physically, they’re brains are smaller with less white matter, which shows less connection and processing occurring within the brain. Cognitive, behavior and neurobiological decreases appear to be due to reduced parent-child interaction, especially meaningful conversation. Studies indicate that homes were not quieter during the pandemic, children continued to talk just as much, but caregivers interacted with them less. These children under two viewed more t.v. and screens and had less meaningful conversation with caregivers, be their parents, grandparents or people at daycare. The impact was seen on their brain sizes, less white matter, lower cognitive/play skills and reduced receptive and expressive language abilities.

What’s the biggest take away? The most important activity you can do for your child and their brain development is engage in back-and-forth meaningful conversations and interactions. If interactions can’t occur with parents due to mental health, job requirements or more, engaging with caregivers, daycare workers, teachers or other adults will help facilitate brain growth, development and function for young children.