We are proud to announce that Sounds Smart is now a part of Infinity Kids. A warm welcome to our new families and staff!

We are proud to announce that Sounds Smart is now a part of Infinity Kids. A warm welcome to our new families and staff!

What is Joint Attention?

Joint attention is an early developing social-communicative skill in which two people share a common focus on an object or event. Two people (often a young child and an adult) use gestures (such as pointing) and eye gaze to reference one thing. Joint attention is often severely limited in children on the autism spectrum as well as children with sensory integration difficulties.

A child is sitting in his parent’s lap and they are both looking at the flowers. The parent points to a butterfly and says “Look”.  When the child matches the parent’s gaze the parent labels the animal, “butterfly”.

Joint attention develops in phases. For the first six months, the goal is for the infant to look at objects and events in the environment in tandem with the mother. The infant learns to attend to the mother’s prompts, such as “Oh, look” and follows her gaze or gesture.

By six months the baby begins to reach for or point to objects with a whole hand.

Around eight months the baby develops an intent to communicate by reaching or pointing to the object then shifting his gaze back to the mother to verify she received his message.

Between eight and twelve months baby learns to point and vocalize to talk about objects in the environment.

Lastly, around twelve months the mother attempts to elicit verbalizations from the child by asking questions rather than providing the labels of objects or events. The child begins to name and talk about objects in the environment in dialogue with the caregiver.

Why is joint attention important?

Joint attention plays a critical role in speech and language development.  When a caregiver and child share a common experience, an opportunity for learning occurs. It is within this context that infants develop gestural, vocal and verbal signals. The caregiver can talk about the object and the child is more receptive to receiving the information. Without joint attention, there is frequently a miscommunication and the child cannot grasp the information the caregiver presents or the caregiver is not able to speak to the child’s understanding.

You may be concerned if:

*If you have concerns about your child’s ability to attend to your voice, consult your pediatrician or ask a speech therapist.

An opportunity for learning develops once joint attention has been established. The child’s attention span and current developmental level, however, must be considered. A six month old’s attention span may be for a few seconds. A toddler can maintain attention longer to learn labels, imitate actions and engage in short back and forth play. An older child can attend to a whole story and remain focused on one topic of conversation across several communication exchanges. 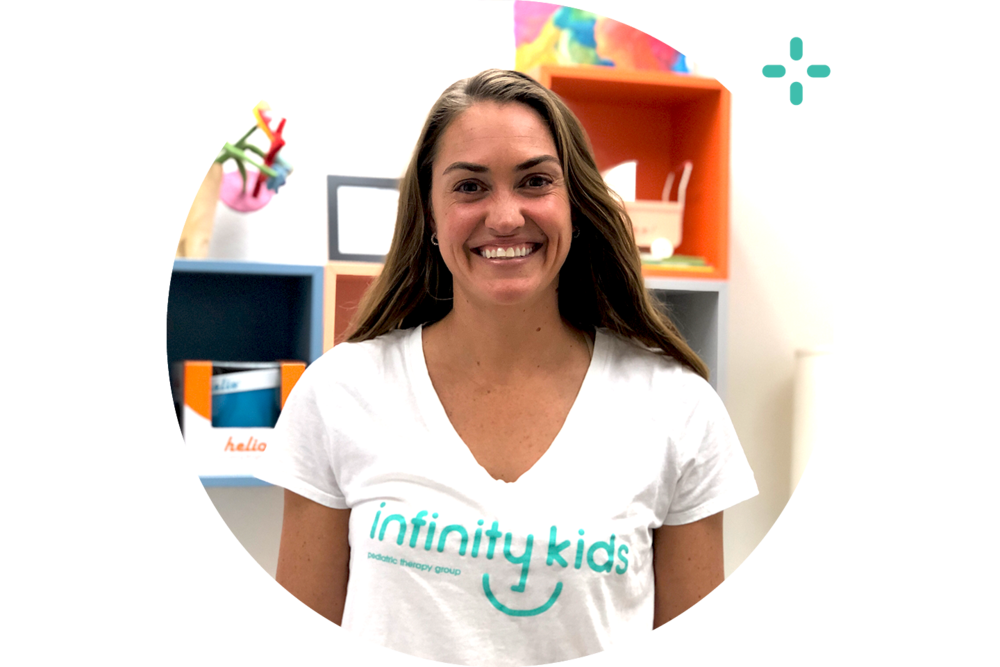 I am passionate about making a positive impact in family’s lives. As a Speech-Language Pathologist, I love helping children and their families learn to communicate more effectively. I thoroughly enjoy the intricate and creative dance of communication. I take a holistic, collaborative approach to therapy and combine my expertise in the areas of language, cognition, articulation, fluency and voice with parent’s wisdom to determine the best treatment plans for children. I love seeing children grow into who they are as they learn to navigate their world through language and the blossoming of family and community relationships. My three sons and spouse keep me humble and laughing, and I am honored to work with Infinity Kids.
All Posts »
PrevPreviousDeveloping Foundational Skills at the Park | Ronald Reagan Park
NextSummer Newsletter 2021Next